10-time GRAMMY nominee Tauren Wells released his new album, Joy In The Morning, a bold 10-song set. From the funky bounce of lead single “Fake It” to the R&B swing of “Breath Away” to the soaring piano ballad “Empty,” he’s redefining his musical lane in real time. Download / stream Joy In The Morning

It is also available in Wells’ online store along with an exclusive line of Joy in the Morning merchandise.

Wells, who has amassed over one billion combined global streams to date, will celebrate the album’s release with an appearance at the GRAMMY Museum L.A. Live on June 13 – part of “The Drop” series – and a performance during the 8:00 AM hour of “Good Morning America” on Wednesday, June 15. He was recently nominated for a 2022 BET Award for his duet with H.E.R.
“Hold Us Together (Hope Mix).” The song was previously honored with GRAMMY and NAACP Image Awards nominations. A celebrated recording artist, multi-instrumentalist and songwriter, Wells has charted six No. 1 radio singles thus far, earning one RIAA Platinum certification and two Gold records in the process. 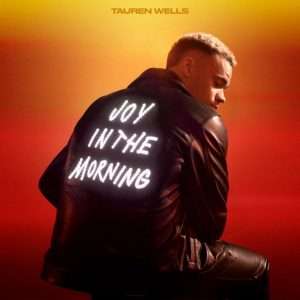 Joy In The Morning is Wells’ third album and first for Capitol Records/CCMG. While the title captures the brightness that comes with the dawn, the songs capture the wide range of human experience. “Throughout the sessions, I was thinking, ‘How many people can I encourage with this album?’” he recalls. “You can consider the pain. Consider the disappointments. Consider the dreams. And now, all of a sudden, you have a soundtrack that helps sooth the wounds or awaken the dreamer,” he adds.

Flaunt Magazine observed in a recent two-page feature, “Coupling raw vulnerability with palpable passion, Wells’ lyrics evoke brave emotions and stark confessions for both himself and his listeners to come to terms with….Wells’ optimism for a better tomorrow demonstrates that music is a common language – an overwhelming sensation of love and infinity in the palm of your hands.” Read the Flaunt feature, which appears in the Rhythm in Retrograde music issue, HERE.