GRAMMY Award-winning rock band Switchfoot has unveiled plans for a massive summer co-headlining tour with Collective Soul. The 40 stop tour is set to get underway July 15th with a concert in Gary, IN and run through September 24th with a show in San Antonio, TX.

“It’s always a thrill to go on tour, but this year is going to be so special because we get to be with not only our friends but a great band, Switchfoot! Southern boys meet Southern California boys, which will be a fun time for all,” Collective Soul’s Ed Roland says. Switchfoot’s Jon Foreman adds, “Been fans of Collective Soul and their songs from day one. Can’t believe it took this long for us to finally tour together. Psyched it’s finally happening!”

Tickets for the Collective Soul and Switchfoot tour go on sale this week, beginning with a special Artist Presale that launches on Tuesday, March 29 at 10 a.m. There is a Spotify presale as well, which begins on Wednesday, March 30 at 10 a.m., with the General + VIP onsale beginning Friday, April 1 at 10 a.m local time. 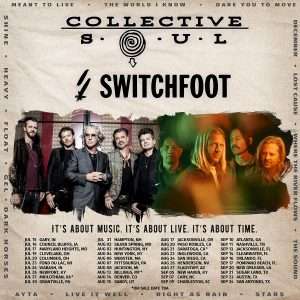 Collective Soul celebrated its 25th anniversary in 2019, releasing their 10th studio album to critical acclaim. Blood debuted at No. 3 on Billboards Alternative Albums chart, helping inject new material into the bands live sets. I think Blood is the beginning of a lot of good music to come, singer and songwriter E Roland said after its release. I think its the best weve ever done. The band had rocketed to fame with the 1993 Shine, the lead single to the multi-platinum album Hints Allegations and Things Left Unsaid.

Switchfoot has sold nearly 10 million copies worldwide, releasing their 12th full-length album interrobang in August of 2021. The album was recorded in a burst of pent-up mid-pandemic creativity in 2020 and 21. They have performed sold-out tours in front of millions of fans in over 40 countries following their breakthrough 2003 double-platinum album The Beautiful Letdown, which helped launch the band with a string of alternative radio hits. In 2011, Switchfoots seventh studio album Hello Hurricane won the Grammy for Best Rock Gospel Album.

Love & The Outcome Unveils Third Studio LP ‘Only Ever Always’