Princessa Joyce – Love Of My Life

On 3 months Ago
Gift

Fresh off earning his fourth career GRAMMY nomination last week, Crowder is gearing up for Thanksgiving and focusing on the true reason for the season with a snowy performance of his new song, “Thanks Giver.” As one of 14 tracks featured on his eclectic holiday record, ‘Milk & Cookies: A Merry Crowder Christmas’ (out 10.21 via sixstepsrecords/Capitol CMG), the soft, country-driven original serves as a timely message of gratitude toward all of life’s blessings, both big and small. 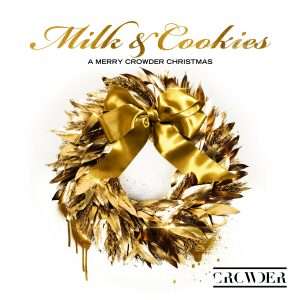 Released on October 21, ‘Milk & Cookies: A Merry Crowder Christmas’ is chock-full of festive originals, re-imagined classics, and creative collaborations with artists including Country Music Hall of Famer Ricky Skaggs and rapper NF’s longtime producer/collaborator, Tommee Profitt. Showcasing Crowder’s unmatched musicianship and unique ability to seamlessly blur genre lines, the album is made complete through his infectious personality and comedic timing, which is showcased perfectly in his tribute to the North Pole’s working class, “The Elf Song,” and in the objective glimpse at the woes of Mrs. Claus, “The Ballad of Mrs. C (She’s Sick of the Beard).” Listen to the full album HERE.

Crowder is nominated for Best Contemporary Christian Performance/Song at the 65th Annual GRAMMY Awards for his moving collaboration with Dante Bowe, “God Really Loves Us,” featuring Maverick City Music. He’ll bring his new holiday music on the road this winter, as he headlines the K-LOVE Christmas Tour, which kicks off on November 30 in Memphis, TN, and continues through December.

CROWDER ON THE K-LOVE CHRISTMAS TOUR

Music Of The Week

RCCG Sunday School Teacher Manual 5 February 2023: The Fruit Of The Holy Spirit I

Austin
On 2 months Ago

Gift
On 11 months Ago

Austin
On 10 months Ago

Aid Programs Reduced Hunger in US in 2020, but Racial Disparities Worsened