Prior to street date, Believe For It began to acquire a buzz throughout the Christian and Gospel industry which heightened the anticipation of hearing new music from the celebrated voice of Winans. The live recording featuring 12 heart-felt songs of worship quickly rose to the top of the charts claiming the number one spot, simultaneously, on four different Billboard Gospel Charts with the album remaining in the number slot for seven consecutive weeks. 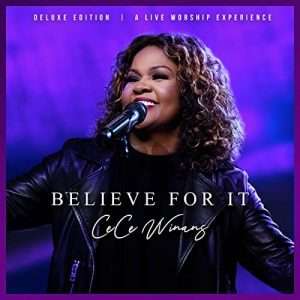 As the 12 time Grammy winner reflects on the achievement of her 11th solo album she has this to say, “I’m thrilled with the success of Believe For It  because I think the message of the song is more important today than ever before. I celebrate reaching Top Ten and the millions of views the videos have received – not because it elevates me in any way – but because the songs promote the truth of the Gospel and the hope we have in Christ.”